A pair of Canadian engineers are working to get a souped-up convertible to the Bonneville Salt Flats to try and capture a land speed record. But it wouldn’t be working to outpace the current land speed record of 760 MPH held by Andy Green. It would be putting the pedal to the metal in hopes of becoming the fastest hot tub car on land. Which I imagine isn’t a tough record to break, seeing as I’m pretty sure one doesn’t exist already.

The vehicular hot tub, affectionately named the “Carpool Deville,” is a revamped 1969 Cadillac Coupe Deville convertible that has been in the making for six years although pioneering engineers, Phil Weicker and Duncan Forster have been working on “reverse amphibious vehicles” for 15 years.

It all started when Weicker and Forster found an old abandoned 1982 Chevy Malibu. Quoting from their Kickstarter page, “This all started in 1996 with an abandoned car, a keg of beer, and a quote from Ernest Hemingway: ‘Always do sober what you say you’d do drunk, that’s the only way you’ll learn.’” The Malibu had been abandoned at a student’s house at McMaster University where the two were going to school for engineering. One thing led to another and the two ended up building what they affectionately referred to as the Carpool. 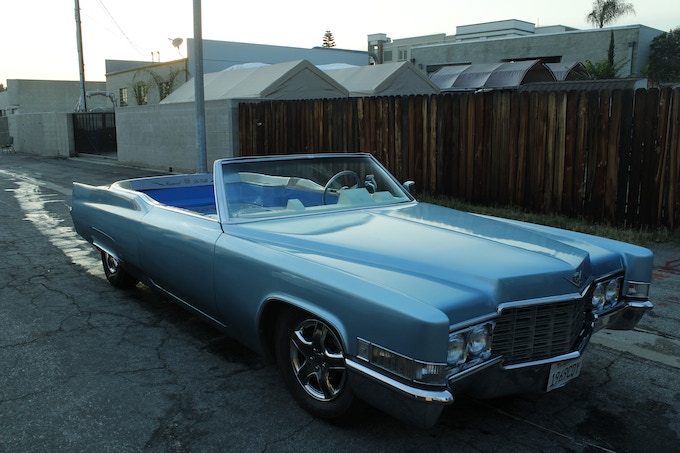 The original Carpool (painted like a Canadian flag) traveled all over campus, attending tailgates and parties. It was a huge hit. They even took it to a car show where they were approached by the Southern California Timing Association who first planted the idea of having one of their vehicles attempt to break a land speed record.  Years of heavy use, however, led to a deteriorating fun-time wagon that could hardly be used, let alone race at high speeds.

The idea never left their minds, however, and the engineers toyed with the notion for several more years. The pair moved to Los Angeles after graduation and eventually came across the Coupe Deville in 2008. Since it needed to be both aesthetically pleasing and structurally sound, Forster and Weicker have worked on it for six years while closely in contact with the land speed community to ensure they would meet SCTA’s strict safety requirements.

So here’s where the project meets Kickstarter: the hot tub car (and the guys who built it) are trying to get to the Bonneville Salt Flats where they can clock its top speed during Speed Week 2014 later this summer. The group is trying to raise $10,000 (they’re currently about $2,000+ short) and have a little more than 24 hours to make it happen.

There are a bevy of prizes offered at all donation levels from a postcard, to a DVD of the documentary made about the building and racing of the Carpool Deville. Some of the more spendy contributions could get you a private hot tub party or even the license plate of the car once the racing has completed.

Their Kickstarter page is great, complete with the video detailing the project (embedded above) as well as lots of pictures and info on their endeavor. One of my favorite bits of humor is from the FAQ question which consists of four questions, three of which are:

This is one of those cases where we’re asking ourselves the wrong question. Less “why?” More “why not?”


Especially since they’d be breaking new (relaxing) ground. To quote their page, “nobody’s ever gone a hundred miles an hour in an open-air, self-propelled hot tub while sitting neck deep in soothing warm water.”

Best of luck to these ambitious engineers and their work to get their feet wet (literally) in the land speed record world. With all the well-wishes behind us, a few words applicable to both the Carpool Deville and for life in general: