Who would have thought that a tiny Idaho town--population 902--would serve as the meeting place for elite river and ocean athletes alike? On the weekend of June 20-22, Cascade hosted the 2014 Payette River Games which has turned into a must-attend event for anyone in the stand up paddleboard and kayaking communities.

Payette River Games 2014 hosted in Cascade, ID, has turned into a must-attend event for anyone in the stand up paddleboard (SUP) and kayaking communities.

The games had plenty other spectator-friendly events happening on the beautiful grounds of Kelly’s Whitewater Park to keep all the attendees occupied and interested: sand volleyball, bocce ball, horseshoes, dog fetching, and a lumberjack event (consisting of axe-throwing and log rolling) were all icing on the cake. 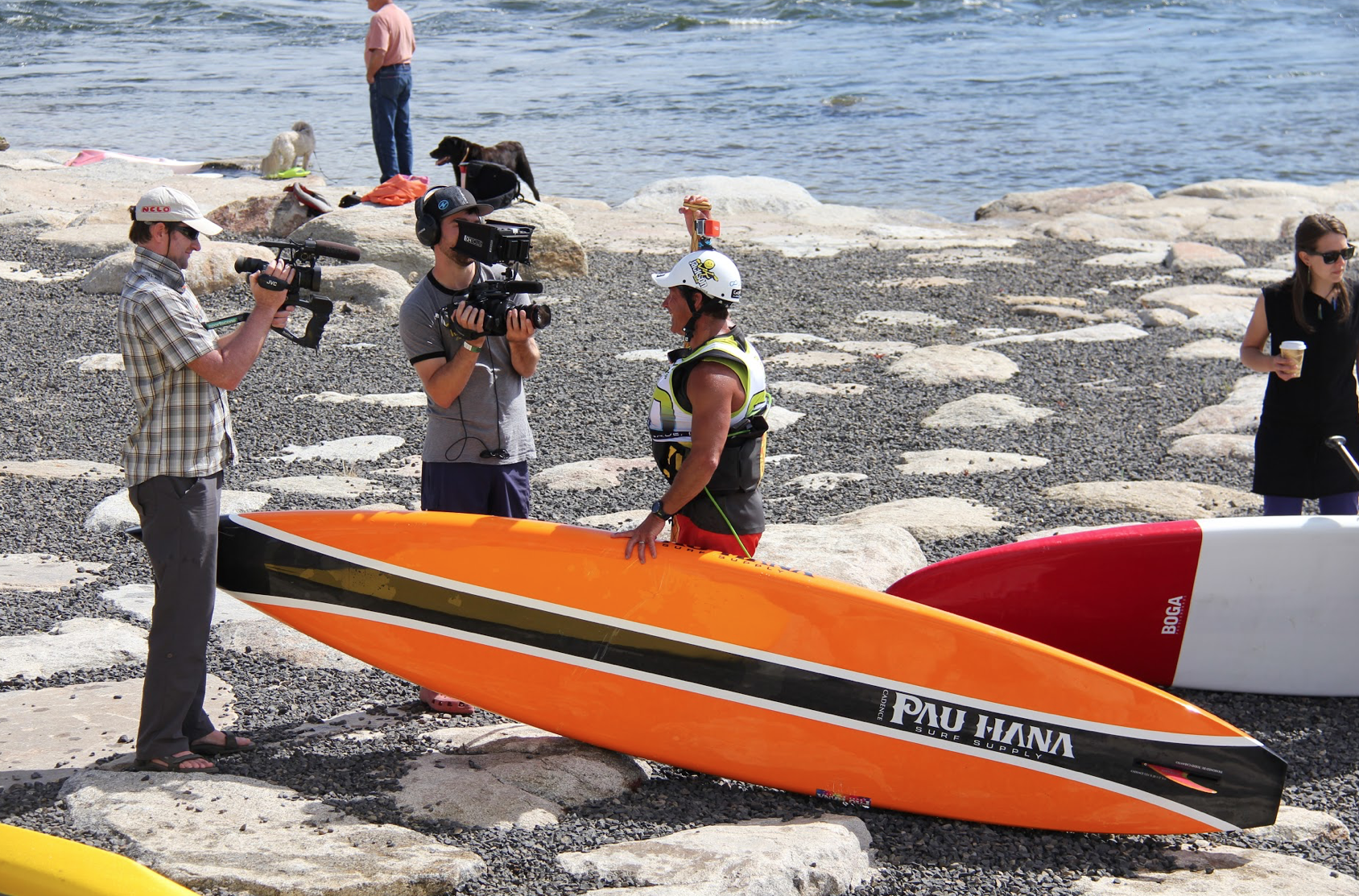 For those there to watch the main events happening on the water, there was plenty of built-in seating in the side of the riverbed that overlooked the Payette River and the scenic fields and mountains beyond. Recently snow-capped mountains behind the stadium and the tiny Cascade main street mirrored that landscape. 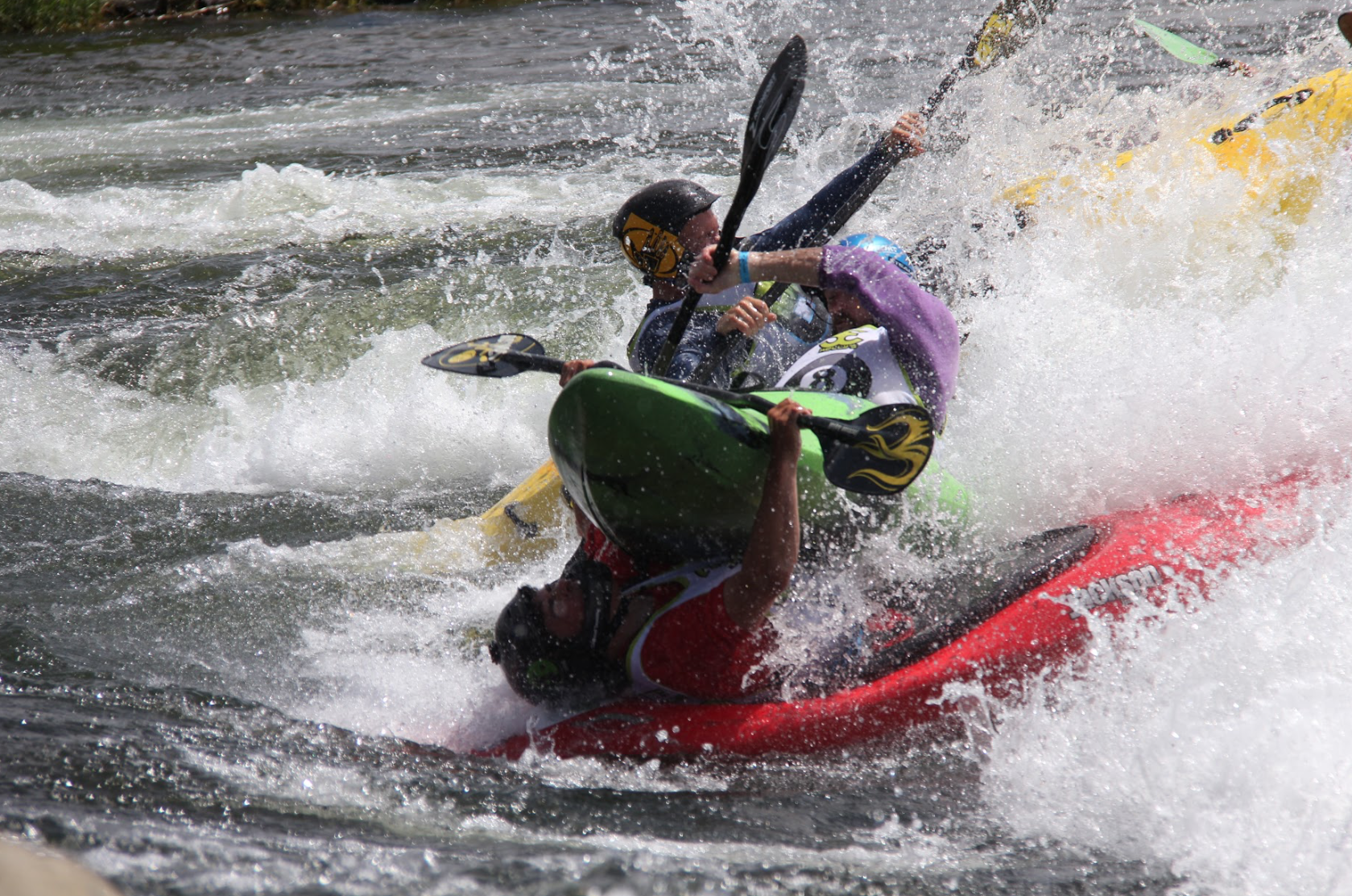 At the entrance of the park and visitor’s center stands a bronze statue made in honor of Kelly Brennan, the park’s namesake and the benefactor’s sister. Surrounded by greenery, flowers and the sun on its face, the statue includes a plaque to commemorate a woman who lost her life in a car accident in 1997. Though she was only 23 years old, she had a thirst for life that left an impression on everyone who knew her. Small reminders of Kelly are all over the park; clovers are stamped into the cement, carved into benches, and were even a part of the park’s logo. It gives a purposefulness to the event and Kristina and Mark Pickard, Kelly’s younger sister and Kristina's husband, were very obviously generous and excited about the growth of the games.

Constructed in 2010, Kelly’s Whitewater Park has a few built-in wave features where anyone from advanced wave surfers to amateur freestyle kayakers can practice. That, combined with the other games happening on the grounds, an array of food trucks, and overall festival atmosphere, effectively doubled (or tripled) the population of Cascade that weekend. The games had a party atmosphere from day one. From the announcers keeping the spectators in the loop of the techniques/tricks happening on the water, to the Red Bull truck with an enormous speaker system and adept DJ spinning tracks, to the hot tubs set up to entice athletes into a soak after a grueling day on the water. One of the things the 2014 PRG did well was create a place where people would want to come, watch, and enjoy themselves. 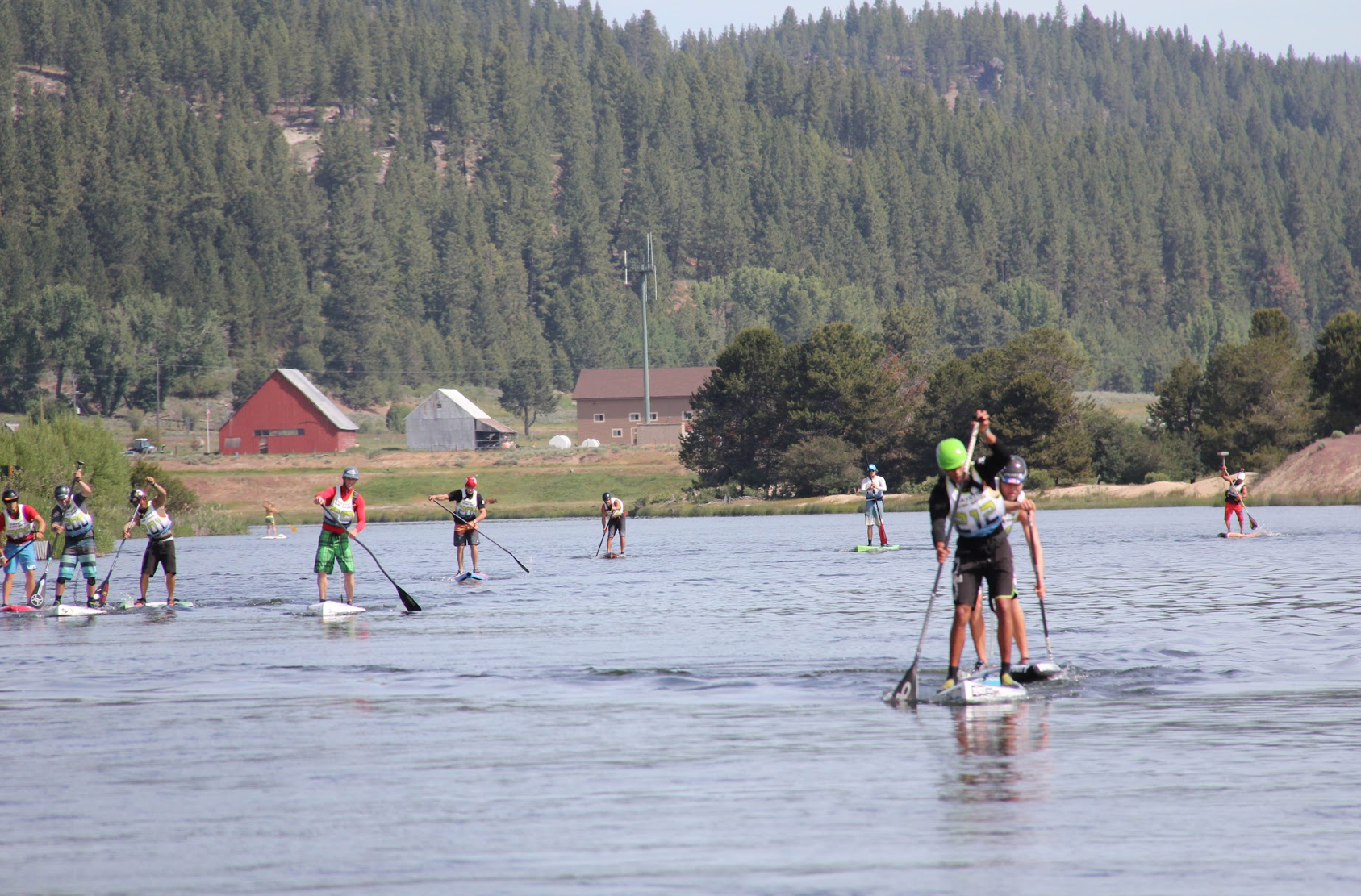 Though beautiful, the course proved to be a treacherous one for both the stand up paddle boarders and kayakers alike. There were two separate stand up events: SUP sprint and SUP Xross. The sprint course started at the bridge on the edge of town and had them paddling through flat water for a stretch until they got to the major fall before the end of the race at the small bridge at the far end of the park. Along the way, paddlers had to navigate around buoys, oftentimes fighting against strong currents and trying to stay on their feet. 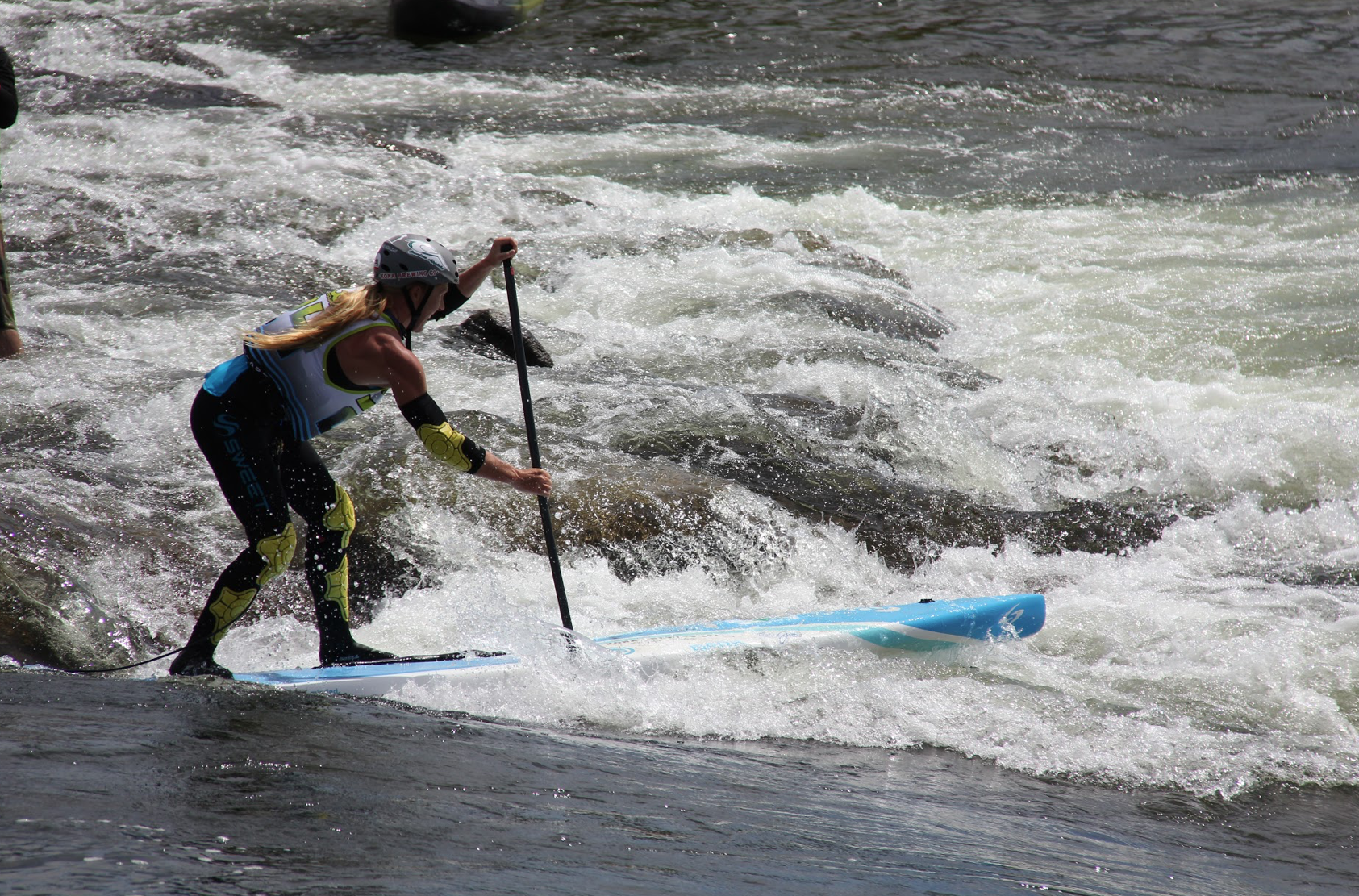 The Xross event proved to be even more problematic, partially because they had to run the course so many times in heats of four men or women. They started turned around, had to navigate around the buoys, down the falls, across the currents, all before finishing under the bridge. Some paddlers would run that course 30 times over the three days of practice, prelims, and final competition.

It was worth it, though. For those who made to the top of the podium as the overall SUP winners (Fernando Stalla and Candice Appleby), there was $10,000 in it for each of them. As a testament to the commitment to the excellence of the games, after a four-way tie in the men’s overall SUP division, Mark and Kristina offered up more prize money so the purse wouldn’t have to be split. That’s why the men’s podium seems a little crowded. 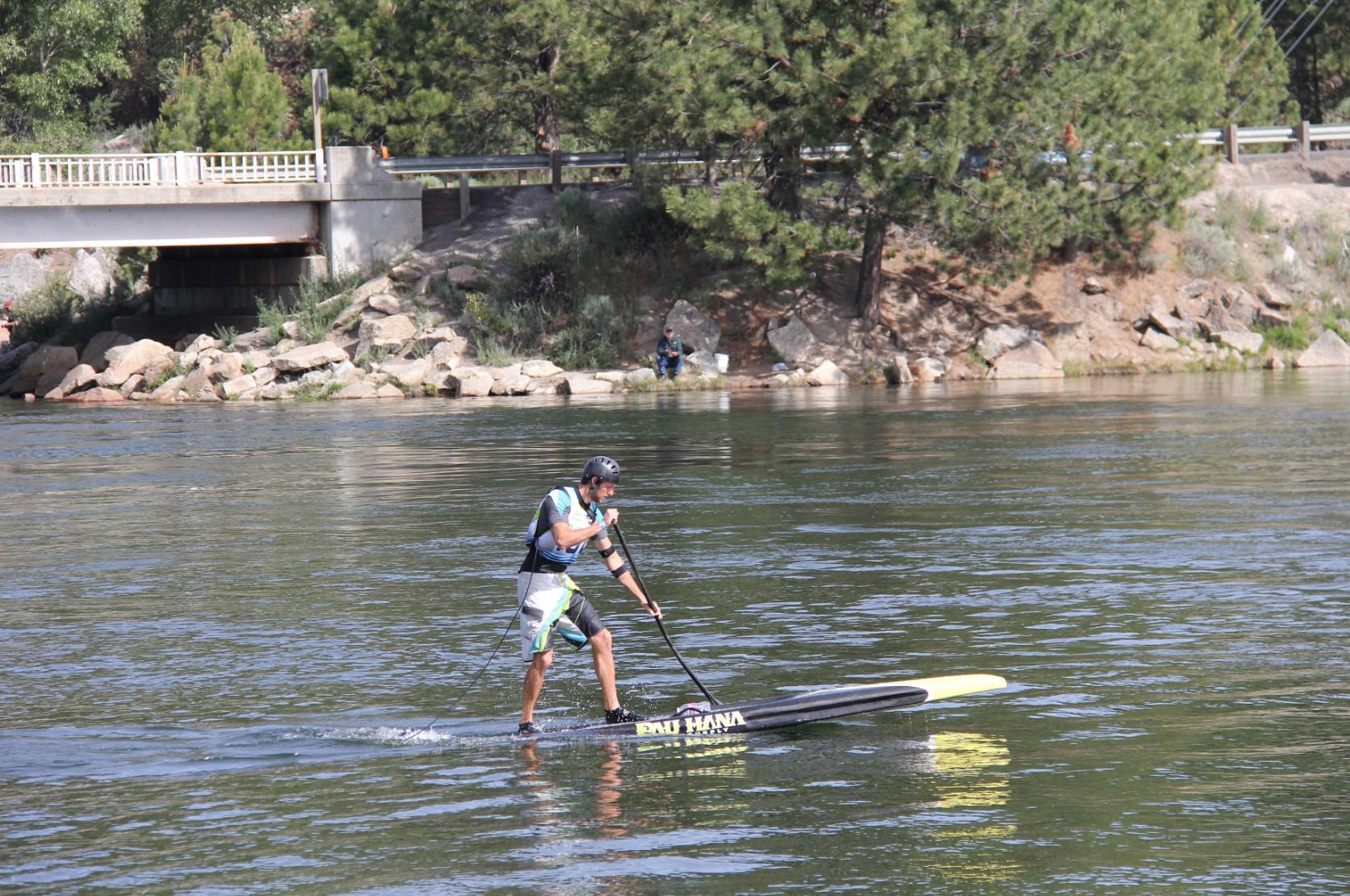 The games had a few moments or events that really stood out among the rest. First was watching blind surfer, Brazilian Derek Rabelo, navigate the river’s wave feature with the help of a spotter who was alongside him in the water, shouting instructions. The city of Cascade actually screened a movie that weekend at The Roxy Theater (that has one showing a day) called “Beyond Sight” which is all about Rabelo’s journey into surfing. By the end of the weekend, Rabelo was sponsored by Kelly’s Whitewater Park.

The lumberjack competition was another fan favorite, mostly because it was SUP'ers who had most likely never done anything like it who entered the contest. The first half of the challenge involved axe throwing. The target was a painted log that was pinned up against a wall of hay bales with a can of cheap beer in the bull’s eye for dramatic effect when it was struck. The second portion was burling (log-rolling) where two competitors faced opposite directions and tried to roll their opponent backward and off the log and into the water. In a pleasantly surprising turn of events, Jamie Mitchell—Australian native and water-man extraordinaire—came away with first place. 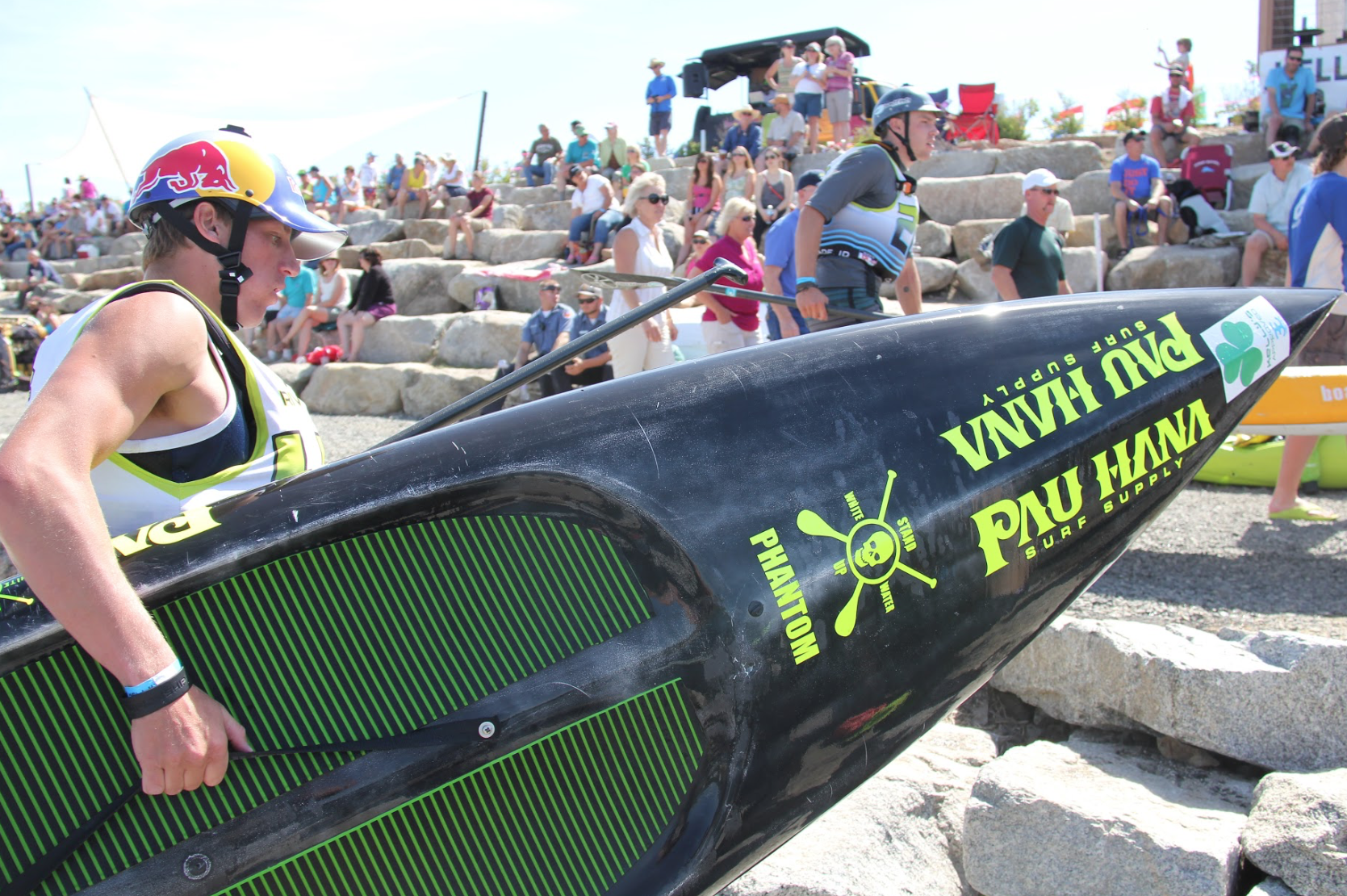 Other audience favorites included the 8-ball kayak competition which is definitely the most contact-filled water sport. It's a kayak race where contestants drop into the river from  a ramp and then are pummeled by other kayakers whose soul purpose is to derail whomever is out in front, often painfully so. It certainly elicited the most shocked “oooohs” from the lookers-on. The dog fetch competitions were particularly adorable because of the cute contestants, obviously.

One thing that the announcers remarked on frequently was the camaraderie amongst the athletes. This is a unique event where whitewater-specialists and ocean athletes come together to compete with and against one another. Even though they have very different skill sets, they all held mutual respect and admiration for the other. 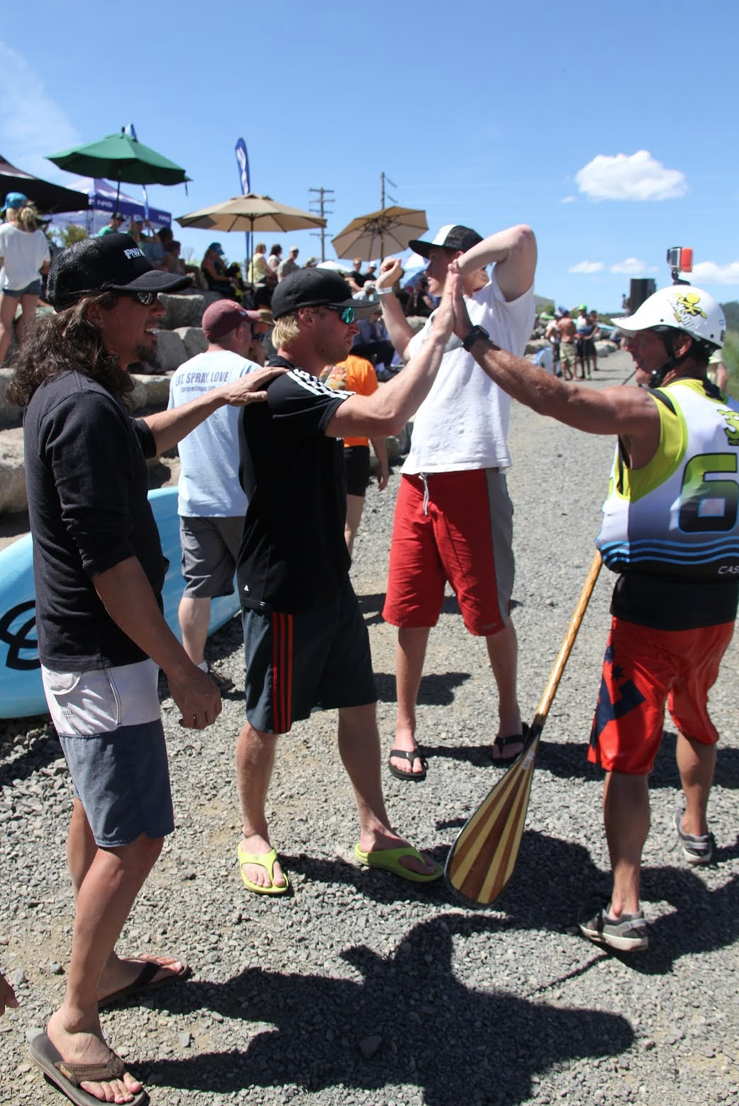 The 2014 Payette River Games were so fun to watch and be a part of. From the impressive display of versatility among the athletes to the remarkable support of the Cascade community, it was certainly an event to remember. And one to be revisited for years to come.

Check out the Payette River Games website for a full list of winners and additional info on the games.