Do I Really Need to Shower Before Swimming?

A recent article from the Daily Mail has brought a familiar swimming issue to the forefront of many people’s minds: what is in my swimming pool water and what can I do to make sure I have the most hygienic experience possible? The research in this article really looked at what’s in our swimming pool water when it evaluated water samples collected form pools in two states: Indiana and Georgia. What they found was somewhat disturbing.

As you already know, chlorine is added to water to keep swimming pools free of bacteria and other contaminants that get into the water via bathers. However, it doesn’t always neutralize what it’s supposed to and often reacts with byproducts in the water. What are some of the things that researchers found in the water?

Most of what’s found in the water could be eradicated if only people using the pool (public pools in particular) would obey the signs that require a pre-dip rinsing. Putting on cosmetics and lotions and just moving through our day-to-day lives results in “stuff” accumulating on our skin. If we don’t rinse it off before getting in the pool, it’s coming off in the pool. Like one giant bath.

So, yeah. Taking a shower before swimming is important.

While 93% of adults say they would never reuse someone else’s bathwater, 40% say they do not shower before getting in the pool. These means conceivably, a large chunk swimmers at your local public pool are bringing whatever is on their skin into the pool with them. Therein lies the problem.

We already know that people pee in the pool, even though they shouldn’t, and the urea from the urine interacts with chlorine to form hazardous byproducts in the water and air. The affect from pharmaceuticals and other personal care products is possibly similar. According to Professor Ernest Blatchley from Purdue University, “There are literally thousands of chemicals from pharmaceuticals and personal care products that could be getting into swimming pool water.” Yikes.

He also adds that there is “unknown potential for them to bring about undesired or unexpected effects in an exposed population.”

There are basically three ways to be exposed to chemicals: ingestion, inhalation, and absorption into the skin. You are vulnerable in all three ways when you’re swimming, especially in an indoor pool. This can lead to what are referred to as RWIs, or recreational water illnesses. The CDC categorizes these illnesses as sickness caused by germs that are spread by swallowing, breathing in mists, or having contact with contaminated water. RWI infections manifest themselves as gastric distress, skin rashes, ear infections, respiratory illnesses, and eye irritation, among others manners of unpleasantness.

The most common side effect that is spread when swimmers get sick from pool water is diarrhea.

When the research group at the Georgia Institute of Technology looked at the swimming pool water, they found 32 different pharmaceuticals from personal care products in the water. The three that were the most recognizable were DEET (what’s found in insect repellant), caffeine, and TCEP—a kind of flame retardant. Although only 32 were categorized, Blatchley said, “there are literally thousands of pharmaceuticals—this is just a small subset of compounds that could be present in swimming pools.”

While we know what showering is important for preventing RWI, we don’t really know what the consequences of exposure to these other compounds are yet. Rather than take the risk, do your part by taking a shower before swimming.

Here’s some advice from waterandhealth.org:

“A thorough shower with soap helps remove perspiration, body oils, cosmetics and traces of urine and fecal matter on the body. Sending those substances down the shower drain goes a long way toward reducing the ‘yuck factor’ for everyone who shares the pool, but there is much more to consider.”

When you use a public pool, pay close attention to the smell. Many people mistakenly think that a strong odor indicates a hygienic pool environment. Not so. That smell is caused by the irritants produced when chlorine reacts with impurities. If you’re a parent who takes your kid to the pool, watch for signs of irritation like rashes on their skin or red eyes. If this happens, exit the pool immediately and get them rinsed off. Keep an eye on their symptoms and make sure they don’t spread.

Indoor pools can be so much fun and are the highlight of many people’s winter routine when the outdoor pools are all closed down. Just be sure to take those signs more seriously and shower before getting in the water. If you want everyone else to give you the same courtesy, you should lead by example! 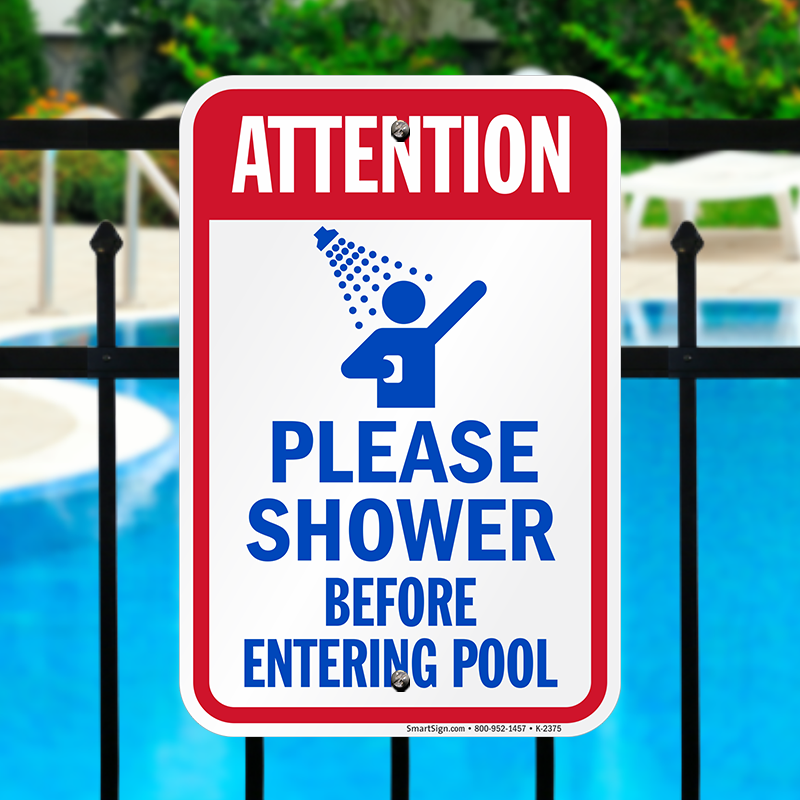