The man that USA Swimming pronounced the Father of American Swimming one year ago has a big birthday coming up this week; Adolph Kiefer will turn 96 this Friday. The former Olympian and inventor will probably do the same thing on his birthday he’s done for years—spend an hour in his pool swimming.

Kiefer, a Chicago native, lives at home with Joyce, his wife of 72 years. He of course has an indoor pool that he uses daily despite the fact that he has neuropathy (nerve damage that causes weakness, numbness, and pain) in his legs and hands. He is restricted to a wheelchair except for his time in the water.

Adolph Kiefer learned to swim in a Chicago drainage ditch out of necessity. He fell in one day, not knowing how to swim but got to the shore by kicking his feet and floating on his back. He thought to himself that he had invented a new type of swim stroke until a swimming coach at his school, Roosevelt High, told him that was the backstroke. It was this stroke that would shape his career and his life.

As a 16-year-old, Adolph became the first person to break the 60 second barrier on the 100 meter backstroke. That was a record that would stand for 15 years. As a teenager, Kiefer would attend one of the most controversial Olympics: the 1936 games in Berlin, hosted by Nazi Germany and presided over by one Adolf Hitler. Kiefer is quick to point out that their names are spelled differently—one of many profound distinctions.

The young swimmer even met the dictator and shook his hand as the leader watched the young American swim in the practice pool and made small talk through an interpreter. In retrospect, that wouldn’t have been how Kiefer would have greeted him.

“I should have thrown him in the pool and drowned him. It would have saved a lot of lives.”

Kiefer had a successful Olympic games, winning gold in the 100 meter backstroke. In the photo of the finish of that final swim, Kiefer was already looking back at the rest of the field who were half a pool length back when he finished. He also became good friends with iconic track star Jesse Owens who won four gold medals at those games. They stayed friends for years afterward. 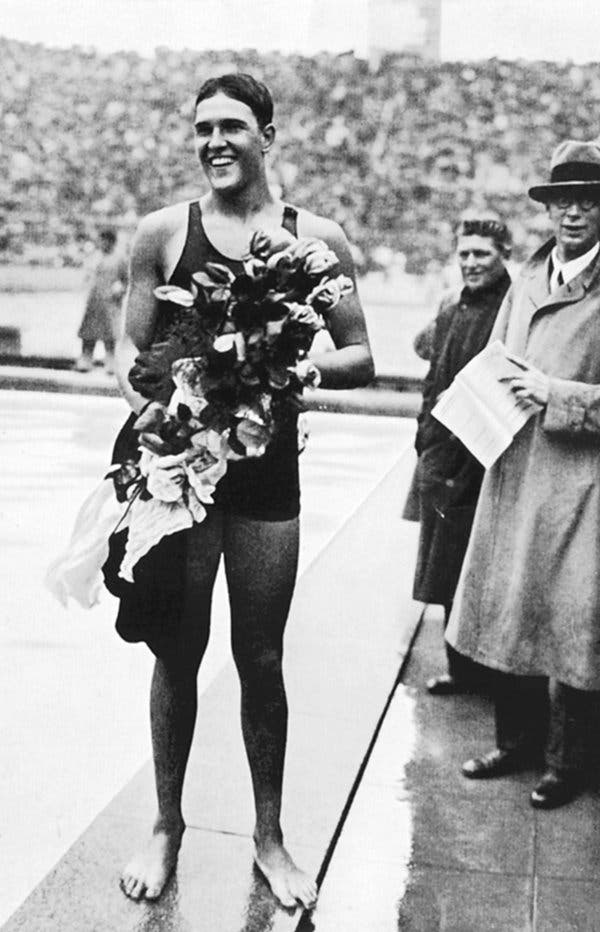 The rest of his competitive swimming career was impressive: in over 2,000 races, Kiefer only lost twice. He set 17 world records, some of which stood for a quarter of a century. He has US national records in every back stroke event and the 3-stroke individual medley. He even invented a flip turn for the backstroke that is what modern swimmers use today.

And that’s not all he’s invented.

Adolph Kiefer holds 14 patents on widely used swim equipment. He came up with the first plastic kickboard, the first nylon swimsuit, and first turbulence-reducing lane lines. All three were huge innovations for the sport.

When swimming at home every morning, he uses a homemade resistance device made out of a bicycle inner tube that’s secured to the side of the pool so he can do strokes in the small pool while staying stationary. He’s thinking that might be his next invention to bring to market.

After he had finished swimming competitively, Kiefer became passionate about teaching others to swim. He joined the US Navy and ran their instruction program during some of WWII, teaching other instructors. The Navy realized at the time that it was losing more sailors to drowning than to bullets and knew they needed to make a change. Kiefer was at the head of that initiative. He was really shocked how many sailors and senior officers in the Navy couldn’t swim. It’s estimated he taught two million recruits in his time in the service.

After his work with the Navy, Adolph spent a lot of time making sure children were water safe. He spent a few decades running swimming programs for Chicago-area children, some of the most prone to drowning in the nation. He doesn’t think drowning should ever happen and has done all he could to prevent it, teaching thousands of children how to swim. In recent years, he’s pushed for Chicago students to be required to know how to swim before graduating and thinks students should still have to pass annual fitness tests.

A great-grandfather now, Adolph Kiefer has a relatively quiet life with his wife with whom he plays bridge three days a week. You’d never know he had famous friendships with people like Jesse Owens and Sir Edmund Hillary. Or that he has a closet full of world record awards, an Olympic Village passport, and telegrams sent to him in Berlin bearing the Nazi swastika. He’s a creature of habit, preferring to energize his body by continuing to swim daily.

“Swimming in the water is a world all in itself. It kept me alive.”

I expect he has many more birthdays to come.