President’s Day is a great holiday, whether or not you get the day off from your employer (but better if it’s the former). In honor of this national recognized day of patriotism, I thought I’d look into one of the most famous pools in the entirety of the US—the White House pool! Here are 24 interesting facts about it for all my fellow triviaphiles.

1) Presidents who lived in the White House were known for enjoying a good swim even before a pool was built on the grounds. Andrew Jackson, for example, was known for taking a morning swim in the Potomac which he would do completely naked. He was also known to dig around in the garden afterward (and before getting redressed). I doubt such an exhibitionist would be happy to live in an area with modern media. 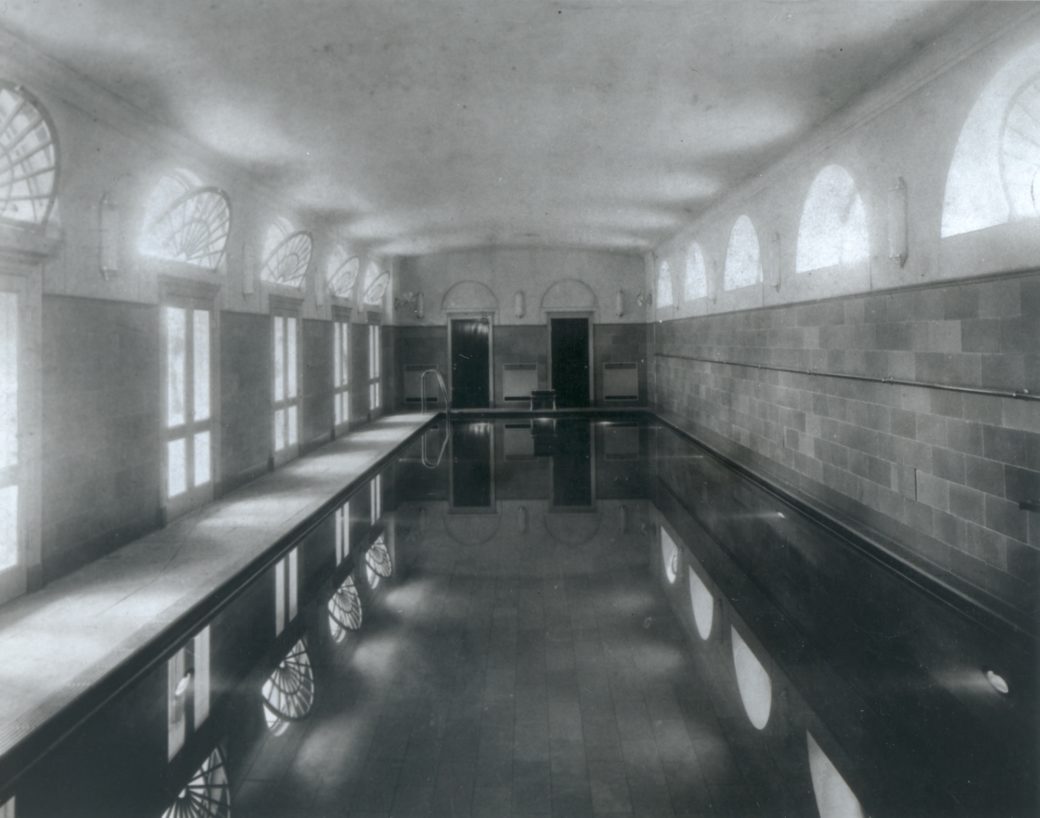 2) Franklin Delano Roosevelt had the first pool built indoors so that he could use it for therapy for his polio.

3) The New York Daily News helped FDR raise the money from American citizens to pay for construction of the pool.

4) Truman was known to swim in the pool with his glasses on.

5) John F. Kennedy swam twice a day religiously, once at noon and once again in the evening as therapy for his bad back. 6) JFK also had murals in the room commissioned which depicted sailboats in the Caribbean along three walls in the pool room.

7) Richard Nixon did not see the practicality of a White House Swimming pool and had the pool covered to make room for the press. This later became the James S. Brady Press Briefing Room. Where the press secretary's podium stands is directly over the deep end of the pool. Symbolic, no?

8) Gerald Ford was an avid swimmer. He considered renovating the existing pool but did not want to displace the press. Instead, a pool and cabana were installed in 1975 under President Ford’s directive. 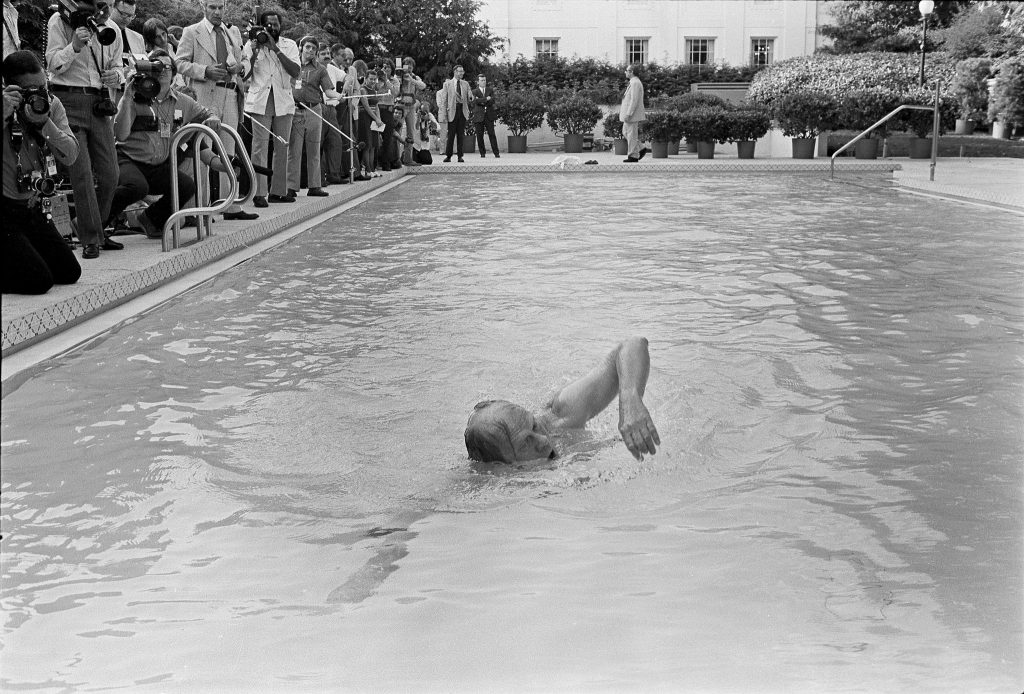 9) Ford showed off for the press upon its completion and used it frequently during his term.

10) Ford’s son, Jack took scuba lessons in it soon after it was finished being built.

11) The pool house was built to include a changing area, showers, and to shelter the pool from the West Wing.

12) An underground passageway was created so that the first family could get from the cabana to the West Wing ground floor without having to go outside. 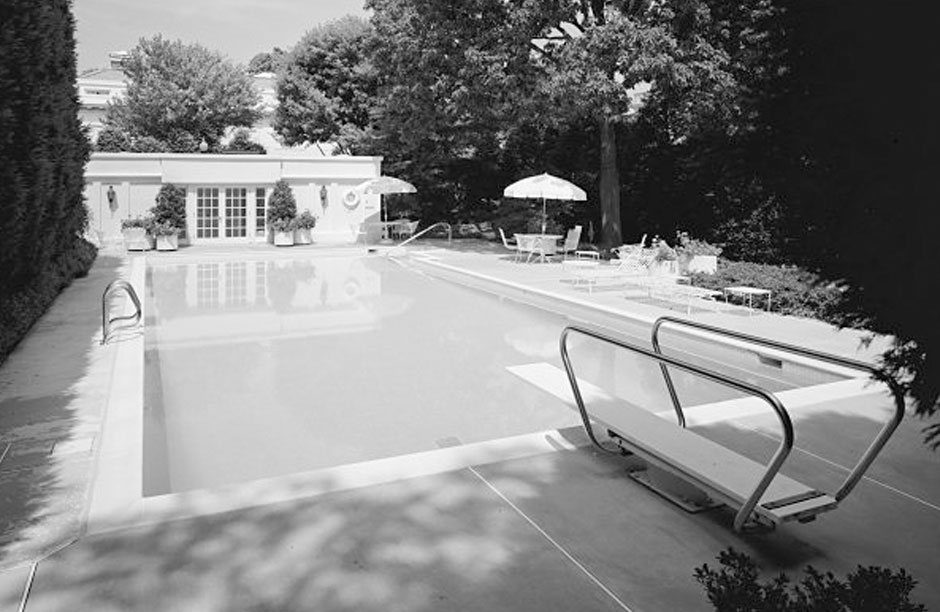 14) Barbara Bush was one of the pool’s most frequent users. She even discovered a paddling rat in the water once, but that didn’t deter Babs.

15) Hillary Clinton also enjoyed the pool and considered having the indoor pool renovated for privacy.

16) Even though it was gifted from the Watkins Manufacturing Corporation to the National Park Service during the Reagan administration, a hot tub wasn’t installed at the White House until 1997 during (you guessed it!) Bill Clinton’s presidency.

17) Clinton pushed for its installation in order to help rehab a recent knee injury.

19) Since the White House grounds are a National Park, the NPS has responsibility for and jurisdiction over the lawn, garden and buildings. If any change is suggested to any of the aforementioned locales, it has to go through the National Park Service first. This includes requests to install a hot tub. 20) In 2002, the pool house/cabana was renovated to help make the White House more efficient. This meant adding more windows, raising the roof (in the literal sense), and solar panels put on top.

21) The solar thermal array uses water heated in pipes by the sun, not photovoltaic cells to create electricity.

22) This structure provides hot water to the pool house, the outdoor spa, and whatever is left is used to help heat the pool.

23) In July of 2007, the “basement,” or the space under the press room that was covered by President Nixon was redesigned so that it could accommodate all the wires and cables for the new demands of an electronic press.

24) The tile sides of the FDR pool remain as part of the walls of the basement underneath the press room. These walls have been signed by the press, celebrities, dignitaries, and members of past and present administrations. Famous signatures include Bono, Sugar Ray Leonard, and former First Lady Laura Bush. You can see a signed portion of wall in the video below.